A campaign was launched in Kabul in the wake of the recent deadly attacks in the capital and other key cities and provinces that left scores of people dead or wounded.

The campaign “I am With You Compatriot” was launched by the ArtLords in Afghanistan with an aim to pay tribute to the scores of victims of the recent attacks.

The ArtLords team in a short statement said “To show sympathy with the victims of terror attacks, ArtLords is distributing armbands with the message “I am with you Compatriot” and we are painting the mural against the warlords and people are driving around Afghanistan with black tinted windows and no number plates,”.

In one of its posters, the ArtLords team has said one of the other purposes of the campaign is attract the serious attention of the security officials to ensure security of the people.

The statement also adds that the campaign also denounces the culture of impunity for the influential figures and power mongers. 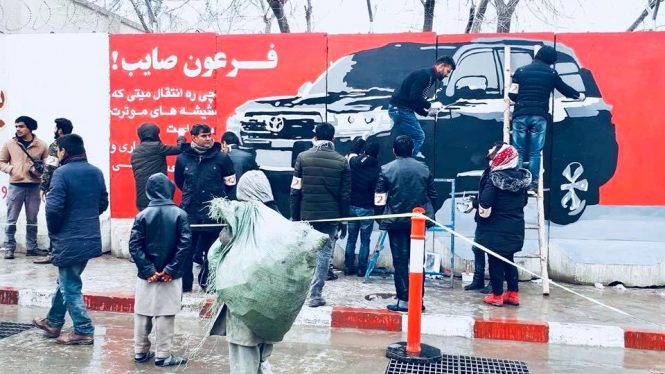 The campaign participants also painted the posters on the walls in Kabul mainly denouncing the influential figures for hiding in vehicles with black tinted windows.

The campaign has been launched days after the Taliban group and the loyalists of the ISIS terrorist group unleashed a wave of violent attacks in Kabul and other parts of the country.

The brutal attacks were widely condemned on domestic and international level with the US President Donald Trump saying his government is not prepared and not willing to hold talks with the Taliban group as he condemned the indiscriminate killings in Afghanistan.